RocketStars: Living the dream bringing rockets and payloads together

The rocket is scheduled to launch the satellite into orbit next Thursday, Aug. 8 at 5:44 a.m. EDT (0944 UTC) from Space Launch Complex-41 at Cape Canaveral Air Force Station (CCAFS) in Florida.

Getting to launch day has required hard work and a rigorous dedication to detail by the scores of men and woman that Davis represents as the AEHF-5 payload integrator at ULA.

"It's truly astounding the amount of people -- all of which are extremely dedicated, hardworking and intelligent -- that it takes to put something in space. I often think of the quote 'if you're the smartest person in the room, then you're in the wrong room.' I never once feel like I'm in the wrong room. I'm grateful to always have the opportunity to learn from my colleagues," he said.

"The AEHF-5 campaign has been one of trial and tribulation for the team and I'm humbled seeing firsthand the resiliency and resourcefulness of all involved to somehow still deliver on major milestones and overcome day in and day out. There's a great sense of camaraderie and a real sense of family among the ULA launch ops team that's formed when you work hard as a team to overcome adversity."

Like so many in the space industry, Davis' interest in rockets was cultivated in high school with the influence of a science teacher.

"My physics teacher, Joe Vallone, started a rocketry club at Plantation High School which first sparked my interest in aerospace engineering. Through that club I had the opportunity to design, build and fly model rockets and compete in the Team America Rocketry Challenge two years in a row as well as NASA's Student Launch Initiative. I certainly owe it to Mr. Vallone for leading me down this path," Davis recalls.

He joined ULA at Cape Canaveral last September as a spacecraft integrator. It is a dream job for Davis, a native of South Florida and a graduate of the University of Central Florida in Orlando with a degree in aerospace engineering.

"It's still surreal to me that directly on the other side of my office's wall is the Atlas V booster and Centaur second stage that'll return astronauts to space from American soil again."

Camaraderie and mentoring by co-workers at ULA has helped Davis on the path to overseeing the payload integration for next week's launch.

"Fellow integrator and mentor Joe Fust was working through the tail end of the AEHF-4 launch campaign when I was hired, so I got to shadow him. In March, I was able to shadow fellow integrator Conner Murphy on console for WGS-10. The view of the launch from the Delta Operations Center launch control center was like none other, situated about 1.6 miles away from SLC-37," Davis said.  "AEHF-5 is my first mission that I'm in charge of as spacecraft integrator. I have several other missions down the road that I'll be primary spacecraft integrator for -- AEHF-6, SBIRS GEO-5 and Lucy -- as well as supporting Conner with Boeing CST-100 Starliner launches and supporting Joe with Mars 2020." 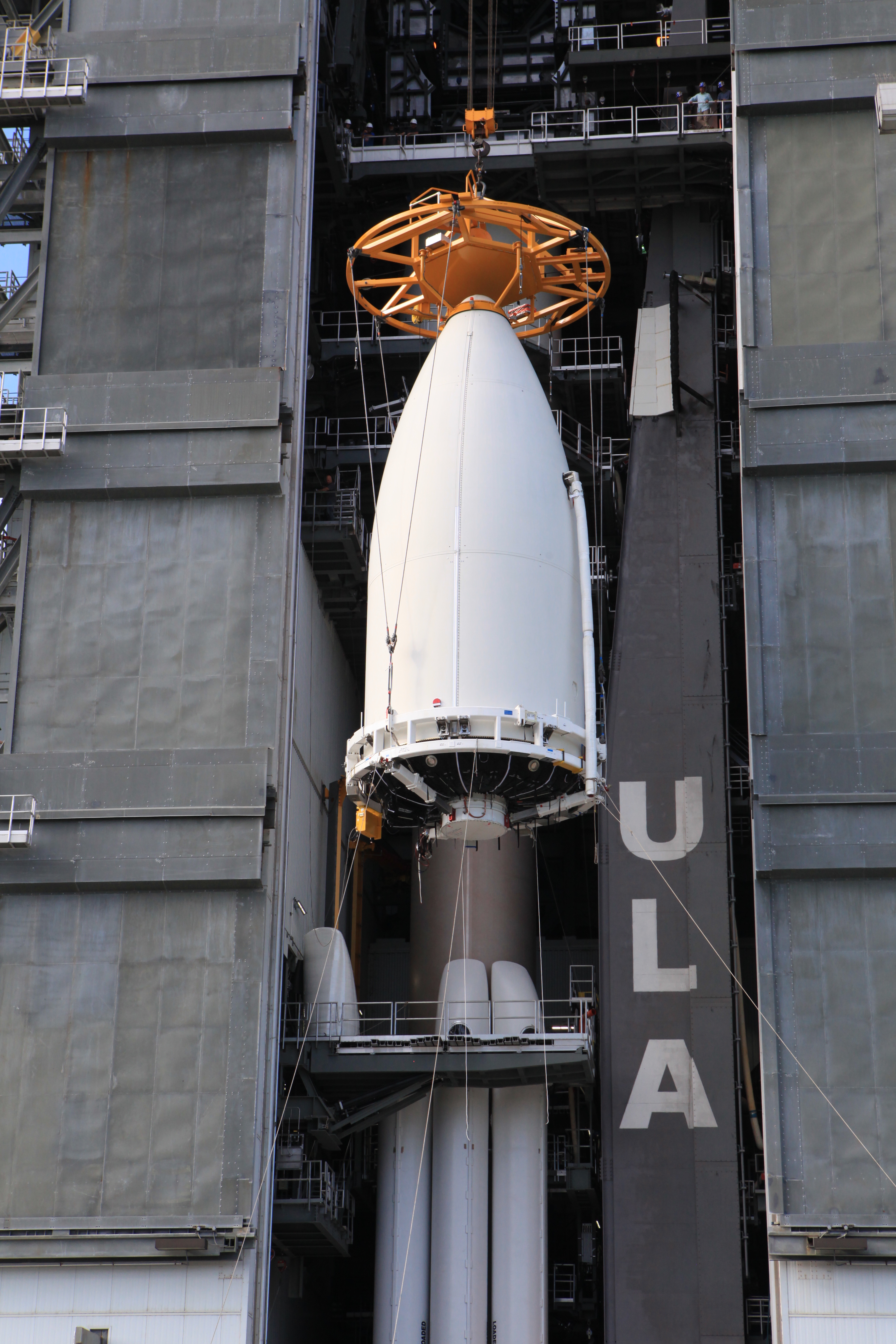 So what exactly does a spacecraft integrator do?

"The integrator serves as the single point of contact between the spacecraft team and the ULA launch operations team. As spacecraft integrator, you have to be in tune with all of the operations that occur for preparing both the launch vehicle (LV) and space vehicle (SV) for launch. I work directly with the space vehicle contractor (SVC), Lockheed Martin for AEHF-5, and the ULA launch operations team to plan when and how the integrated operations and mission unique operations fit into the overall LV processing flow," Davis explained.

"To effectively integrate the two teams' operations you need to understand the interdependencies between both teams' operations. For example, the timing of when specific hardware is installed, when specific systems are configured and tested, timing of hazardous operations such as SV fueling, LV fueling and ordnance installations, and specific configurations of the access platforms in the Vertical Integration Facility (VIF)."

Davis' duties for AEHF-5 began before the spacecraft even arrived at the launch base from its Lockheed Martin manufacturing facility in Sunnyvale, California, planning and coordinating the payload's requirements to ensure all are understood and implemented.
"Once the SV arrives, that's where the real fun begins and I get to follow the SV around through its journey to launch. I run a daily status meeting in the morning with the SVC team to coordinate the day's operations and near-term operations," he said.

Throughout the satellite's time at the Astrotech payload processing facility, Davis was there with a watchful eye on pre-launch preps.

"While at Astrotech, I got to spend much of my time in the cleanroom when we run integrated operations. These major activities included SV mate to payload adapter (PLA) and encapsulation," he said.

After being enclosed in the protective shroud for liftoff, the satellite was transported across the river to Cape Canaveral Air Force Station for hoisting atop the Atlas V.

"After SV transport to the VIF, I spend much of my time at the VIF coordinating integrated operations through flight closeouts. The notable operations include SV hoist and mate and mission unique test events. Despite all of the planning that's put in place prior to SV arrival, real-world circumstances can change all of those plans in an instant. This mission has been full of them. Technical issues and a long string of inclement weather throughout the mission flow caused the teams to readjust on a daily and hourly basis," he said.

"While it can be stressful there's an adrenaline rush to it and a feeling of fulfillment to play a role in something greater. Every day is very dynamic. In this role, you get to be intimately involved with the mission at hand and each mission is different and unique with its own set of challenges."

Davis will be on console in the Atlas Spaceflight Operations Center on launch day under the call-sign Spacecraft Coordinator, or SC, to keep the ULA and SV teams informed of how each team is progressing through the count. And he will receive and acknowledge the instruction from Launch Conductor Scott Barney for AEHF-5 to transition to internal power.

"If anomalies are encountered during the count, particularly if the anomaly is with a ULA system that impacts the SV, then I help raise the issue to my anomaly chief (AC) who then gathers the integrated team of necessary personnel to troubleshoot and develop a path forward."

"Honestly, prior to joining ULA, I was at a point in my career where I didn't think I'd find an opportunity to break into the space industry and I got to the point where I gave up on the dream and accepted that as fact," he said, having worked for six years after graduating college at Lockheed Martin Rotary and Mission Systems as a systems engineer on the F-35 Autonomic Logistics Information System program.

"Photography was something I always wanted to get into and I finally bit the bullet and bought a camera. I started tracking every launch out of the Cape and tried my best to make it out to as many as I could to photograph. There's something about watching a launch that's cathartic. That feeling never gets old either. The more launches I watched and photographed, the more I was inspired to re-pursue my dream of working in the industry so I started the job search process, religiously checking ULA's career site."

Last summer, during the time of the Delta IV Heavy launch of NASA's Parker Solar Probe, he found a job posting that fit his skillset, applied and was offered an interview three days before the historic mission.