Building on a diverse career of rocketry, aircraft and helping develop the space station, the newest role for United Launch Alliance's Dane Drefke is leading the Blue Team that will ready Starliner just before it launches atop the Atlas V for the Orbital Flight Test. 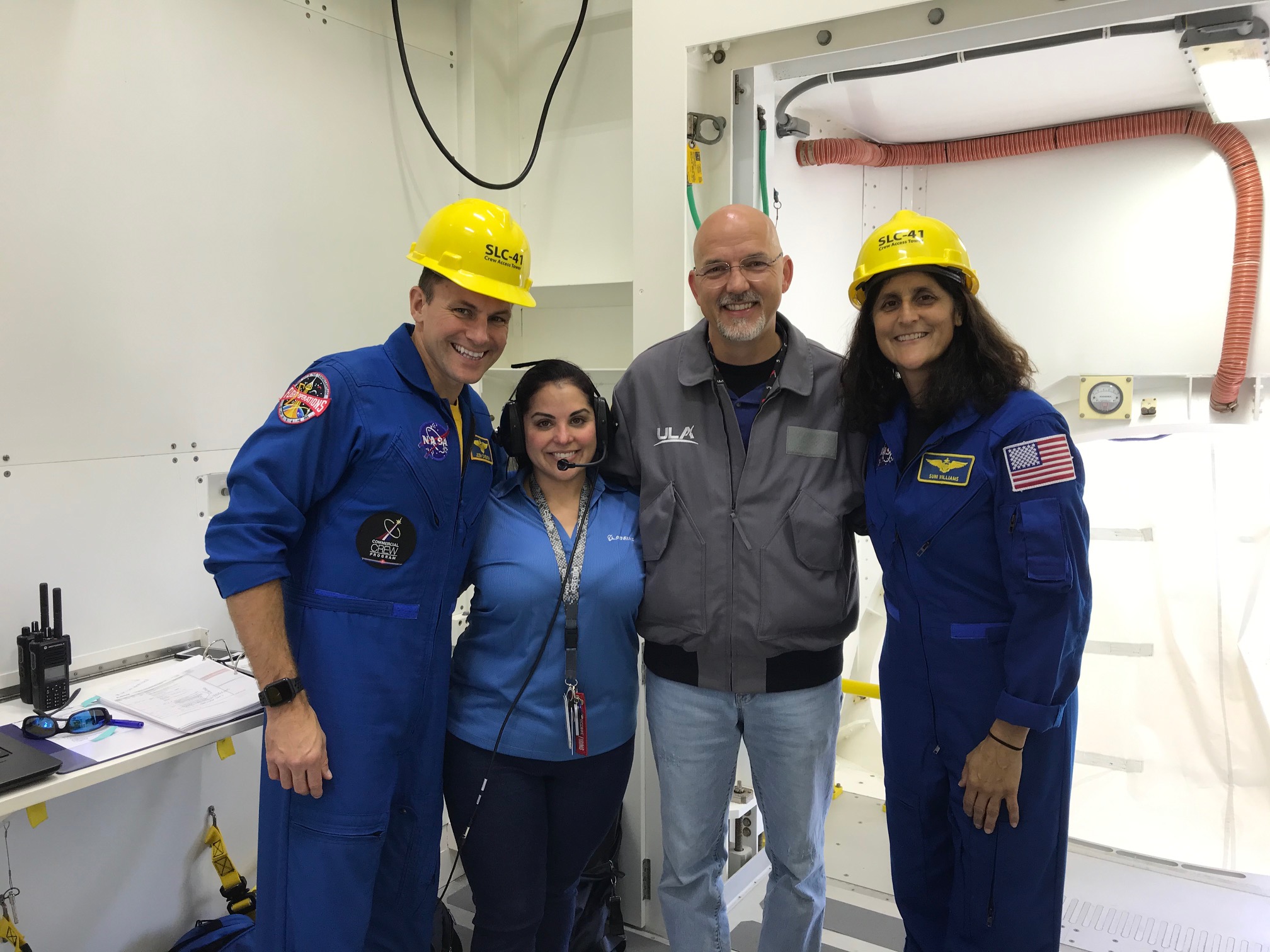 Born in Colorado Springs, Colorado, and raised in Southern Missouri, the aerospace engineer began his career 25 years ago as a designer for General Electric, but soon moved to California and started working on the International Space Station for McDonnell Douglas in Huntington Beach.

"I was an Electronic Development Fixture specialist and engineering checker. I would assemble the detail models other groups made and would check for form, fit and function -- no structural interferences allowed in space!  This was a lot of fun and I really was hooked on space at that point," Drefke recalls.

Then, Drefke transferred over to the Delta II program as a design engineer for the first stage separation systems.

"I became an ordnance specialist. I designed a lot of the hardware that would hold the solid rocket boosters on the core vehicle, and then separate them. I did a lot of travel to the launch sites to support many different Delta II missions. I really enjoyed it and had a lot of friends at the launch sites."

Later, he was asked to be a mentor and technical leader for the beginning of the Delta IV program.

He moved back to Missouri to assist his mother who was battling cancer, which led to working for Boeing in St. Louis as a structures engineer on the Air Force's C-17 military aircraft and a short assignment on the A-10 program to design new wings for that aircraft.

In 2010, he returned to California and took a job with ULA at Vandenberg Air Force Base.

"I worked on all three of the ULA vehicles -- Delta IV, Delta II and Atlas V. I was the responsible engineer for all the ordnance operations for all three. I am especially proud of being a part of the team that launched the first Delta IV Heavy from the West Coast. More recently, I had the honor but bittersweet duty of helping to fly out the very last Delta II."

In 2016, Drefke became the Atlas mechanical operations lead at the Cape, heading up the group responsible for all the umbilical systems and mechanical access, such as platforms and work stands in the Vertical Integration Facility and at the launch pad.

"We're the ones that roll the rocket to the pad the day before launch, and my biggest role is the 'Stand Engineer' who is the field commander and eyes and ears for the launch conductor during roll out and launch preps."

During the final hours of the countdown, the launch conductor in the control room radios the stand engineer to clear all personnel from the complex for the start of fueling operations. Drefke has served in that role for the past 20 or so launches.

Now, he is ready to take on a new title, the Blue Team Leader (BTL) for the Orbital Flight Test launch of Boeing's CST-100 Starliner spacecraft.

After the Atlas V rocket is fully fueled and the countdown reaches the T-minus 4 minute point, where clocks will hold for four hours, the Blue Team will enter Space Launch Complex-41 and take the elevator to Level 12 of the Crew Access Tower. That's the level with the swing arm and White Room leading to the Starliner hatchway.

Drefke, as the BTL, he will be in charge of the 8-member team of ULA and Boeing technicians responsible for readying Starliner's crew module for liftoff.

The Orbital Flight Test is an uncrewed voyage of Starliner to the International Space Station, a complete launch-to-landing demonstration of the spacecraft before astronauts fly in the capsule.

Despite no astronauts to load into Starliner for OFT, the Blue Team will use the launch to test the processes, timelines and tools to ensure all is in readiness for crewed missions to come.

"We want to fully simulate the operations needed to prepare the spacecraft for crew.  This is an Orbital Flight Test in every sense of the words, so this is our best opportunity to refine our operations and ensure everything works as planned and on the timeline needed to ensure we get everything ready for launch," Drefke said.

"The Blue Team Leader will be the overall person in command on the Crew Access Tower when the team returns to the pad. I will direct the team, and ensure the emergency escape vehicles are started and ready," he said.

After the ULA technicians configure the White Room, the Boeing technicians will open the Starliner hatch and simulate the astronaut ingress activities.

"For the next few hours the Blue Team Leader will remain in constant contact with the launch conductor to monitor the status of the vehicle and all ground systems.  The Blue Team Leader coordinates the movement and position of all personnel on the tower, including the arrival of the flight crew (for CFT and later missions)," he said.

Once the capsule operations are completed and the Boeing team clear, the ULA Blue Team members will then prepare the White Room for launch.

The team will be stationed just north of the pad for liftoff.

"We stand by there in the event we need to return to the pad quickly," Drefke said. "It will be an amazing place to view the launch and I'm really looking forward to it!"