From the moment an Atlas first stage arrives at Cape Canaveral until giving the "Go Atlas" call seconds before liftoff, ULA's David Kube works as the lead engineer managing all aspects to ready the stage for launch. 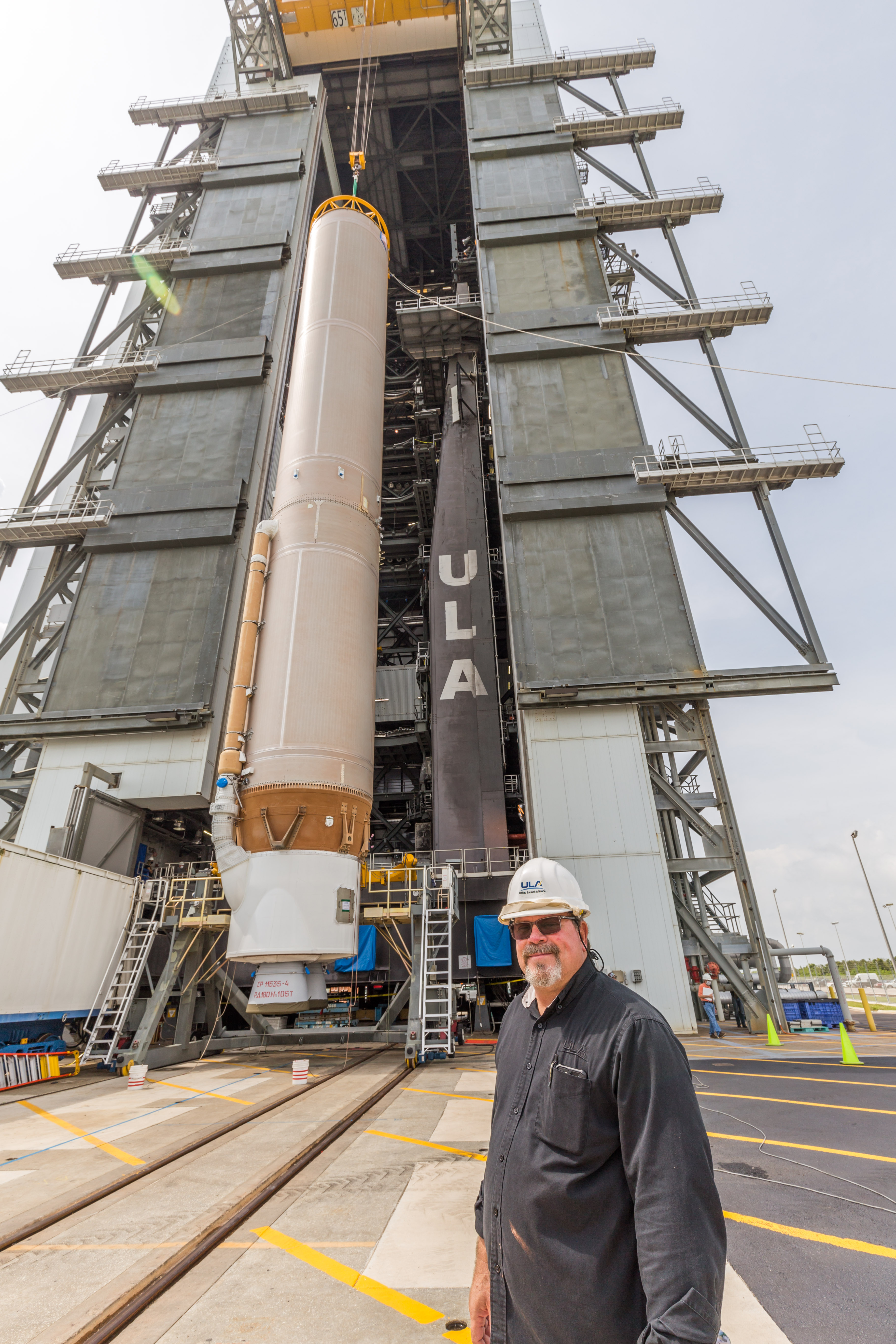 Born at Patuxent River Naval Air Station, the Navy brat is the youngest of five brothers, all who grew up to be engineers. After he graduated from the Florida Institute of Technology with a degree in mechanical engineering, he went to work for General Dynamics in 1988.

He has worked on many elements that contribute to a successful launch, ranging from rocket transportation and handling, airborne and ground-side propellants, pneumatics and hydraulics, propulsion systems, launch pad swing arms and the umbilicals at the base of the rocket "and probably a few others."

Today, he serves as the ALE, the Atlas lead engineer, who guides a team of knowledgeable and dedicated engineers to oversee first stage operations, scheduling of vehicle operations, managing manpower, coordination of activities and system surveillance.

"Sometimes I get my hands dirty and run a task with a crew of technicians when we are short on engineering support," Kube said.

Since mid-May, Kube has been focused on readying the Atlas V rocket that will launch NASA's Perseverance rover to search for evidence of past life on Mars.

The first stage was flown to Cape Canaveral's Skid Strip runway from ULA's Decatur, Alabama factory aboard a cargo aircraft. Kube oversaw the offload and transport of the 107-foot-long rocket to the Atlas Spaceflight Operations Center (ASOC) on May 19.

The stage underwent checks and preps in the ASOC Ordnance Bay for a week before the Launch Vehicle on Stand (LVOS) day on May 28 up the road at the Vertical Integration Facility (VIF).

LVOS is a major milestone for any launch campaign as the first stage is brought to the VIF, hoisted upright and secured aboard the Mobile Launch Platform that supports the rocket until liftoff.

Assembly of the Atlas V 541 rocket continues by attaching the solid rocket boosters (SRBs) one-by-one to the sides of the first stage.

"My team supports all mechanical and propulsion aspects of the Atlas V first stage and SRBs, from the time they arrive at Cape Canaveral Air Force Station (CCAFS) through launch. This includes preparing all ground support systems at the ASOC, VIF and Space Launch Complex-41," Kube said,

"And for Mars 2020, this included an Antonov offload at the CCAFS Skid Strip and SRB preparations at our AJ60 Storage Facility.”

On launch day, Kube will be stationed at the ALE console in the Launch Control Center as the Atlas lead engineer to support propulsion, pneumatics and hydraulics on the first stage.

When the launch conductor calls for the final status check at T-minus 25 seconds, Kube will declare "Go Atlas" for launch.

"I am very blessed to be doing what I'm doing," Kube said.

"The proudest accomplishment in my career so far is supporting 100 percent mission success on Atlas V -- from AV-001 through USSF-7."

Kube and his wife Suzanne, a nurse, have three children.