In a topping out ceremony that honored traditions in construction, the final beam has been hoisted atop the new Mobile Launch Platform (MLP) from which the next-generation Vulcan Centaur rockets will lift off. 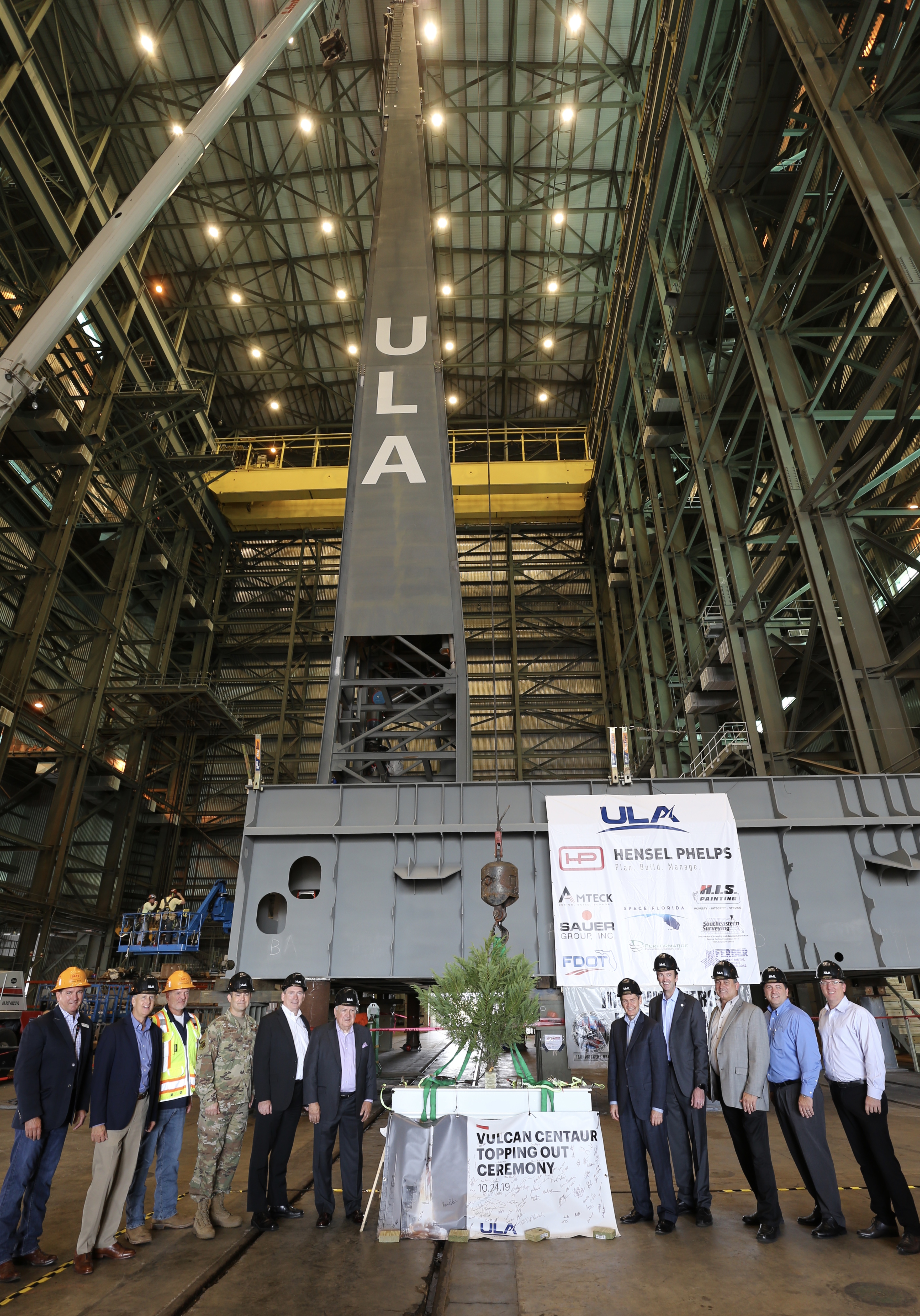 "We are excited to complete another milestone for the Vulcan Centaur program," said John Elbon, ULA's chief operating officer. "This rocket will allow us to increase efficiency and lower costs, without sacrificing the reliability customers has come to depend on."

The MLP was manufactured in segments off-site by Sauer Inc. and then shipped from nearby Oak Hill, Florida, to the launch base for assembly inside the SPOC, a legacy facility officially renamed today as the Spaceflight Processing Operations Center.

This dedicated MLP is similar to the Atlas V's platform, but is built to support the much larger size of Vulcan. The Atlas V first stage is 12.5 feet diameter and Vulcan is 17.7 feet wide.

The structure stands 183 feet tall. It will soon be outfitted with the equipment and umbilicals needed to supply Vulcan Centaur with liquefied natural gas (LNG) propellant and liquid oxygen to the first stage, liquid oxygen and liquid hydrogen to the Centaur upper stage, conditioned air to the payload fairing and rocket compartments, electronics, power lines and command-and-control cabling. When complete, the platform will weigh 1.3 million pounds.

As part of the topping off ceremony, a plaque was presented to Frank DiBello, president and CEO of Space Florida, from Mark Peller, ULA's vice president of major development. The plaque will be permanently placed on the MLP to commemorate the partnership between Space Florida and ULA to fund the MLP construction.

Today's milestone keeps Vulcan Centaur on course for its maiden flight in 2021. The new rocket is purpose-built to perform the full spectrum of national security space missions, delivering any payload to any orbit at any time.

Vulcan will be more than 200 feet tall and deliver as much as 3.8 million pounds of thrust from its two BE-4 main engines and up to six side-mounted GEM63XL solid rocket boosters. That performance enables a single-core Vulcan Centaur to launch the largest payloads that have required the three-core Delta IV Heavy to carry them into space.

Seven launches of the next-generation rocket have already been sold, including the inaugural flight that will send Astrobotic's Peregrine commercial lunar lander to the Moon. Subsequent missions will carry Sierra Nevada Corporation's Dream Chaser spacecraft for roundtrip voyages the International Space Station. 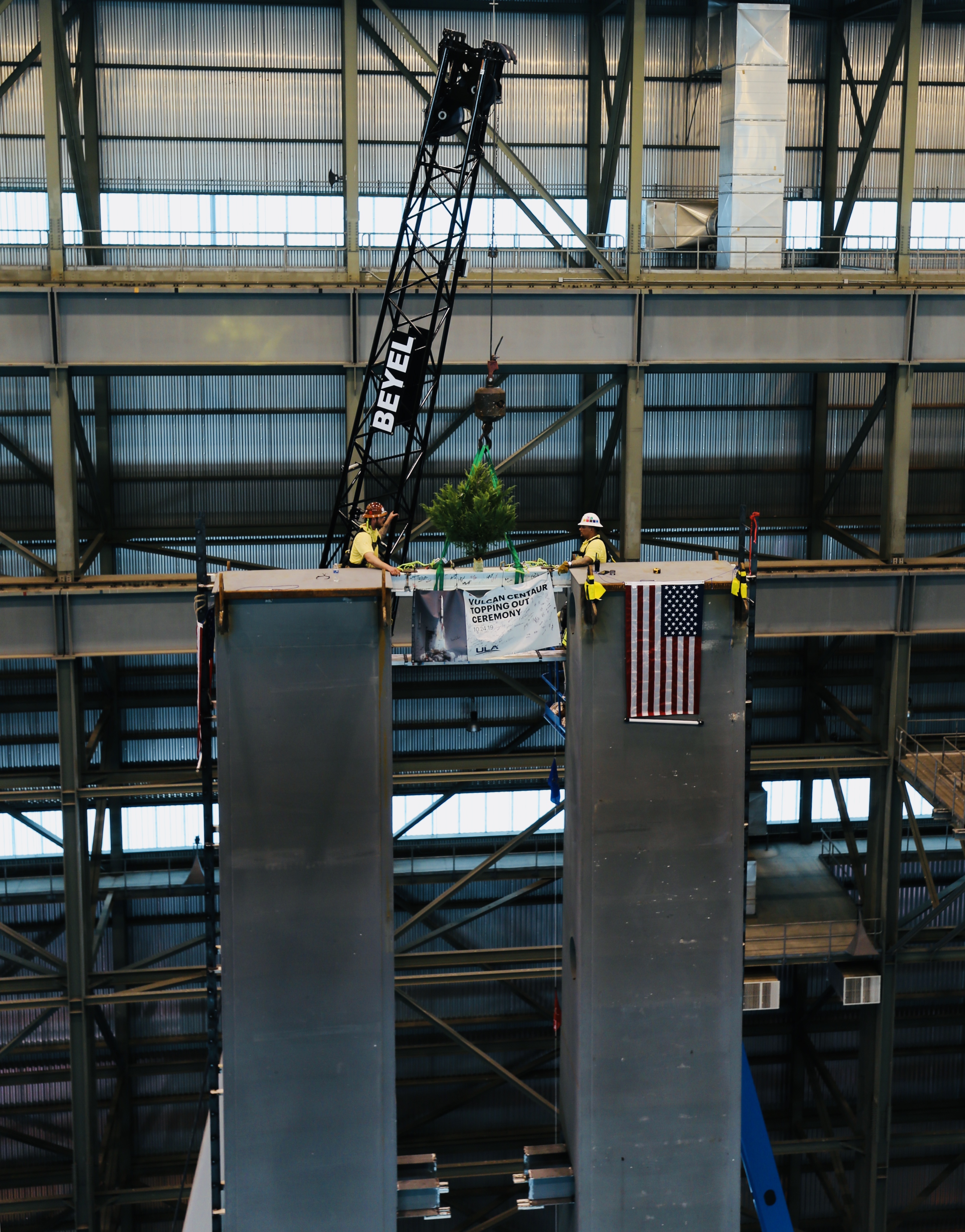 "ULA has dramatically lowered the price of launch with the Vulcan Centaur by establishing long-term strategic partnerships throughout the supply chain, reducing costs while stabilizing the industrial base," Peller said.

The SPOC was originally called the SMARF during its support of the Air Force's Titan IVB rocket program as the Solid Motor Assembly and Readiness Facility. The building now has been repurposed to construct the Vulcan MLP and also serve as a storage location for either the Atlas V or Vulcan platform depending on whichever one is not in use at the VIF.

Rail tracks connect the SPOC to the Vertical Integration Facility where Vulcan stages, solid rocket boosters and the payload will be stacked atop the MLP before rollout to the Space Launch Complex-41 (SLC-41) pad for fueling and launch.

The historic SLC-41 is currently undergoing a transformation into a dual-use pad that will seamlessly handle both Atlas V and Vulcan Centaur rockets simultaneously.

The two rockets are distinctly different -- from their size to the fuel they use and the main engines that power them skyward. Those major contrasts in characteristics make SLC-41 the first launch pad in the world to serve two entirely separate rocket families at the same time.

The pad modifications include installation of the LNG storage area, expanded infrastructure to hold the liquid hydrogen and liquid oxygen for the larger Centaur and an improved Acoustic Suppression Water System (ASWS).

And alterations in the VIF have replaced access platforms that surround the rocket with reconfigurable planks that can conform to either Atlas or the larger Vulcan.